Shymkent is Kazakhstan's third largest city after Almaty and Astana, and nearly 650,000 people lives in the Southern Central Kazakh city. After one hour we get out from the taxi, so we arrived at the hotel after midnight.

The central part of the city is characterized by the same tree-lined streets and pastel-colored four-storey, tincture, communist era buildings that are common throughout the region. The new grass park and monuments are located in the city center.

We just came here to make one day trips to the neighborhoods: Turkestan, Sauran, and Sayram.

Turkestan is not the most well known Kazakh city whose name is easily confused with Turkmenistan. A century ago there was a region whose borders were close to the border with Turkmenistan today and what was called Turkestan.

Turkestan is one of the few cities in Kazakhstan that can be said to be history. It was inhabited since the 4th century and it was an important part of Silk Road. Today, most of us are clearly exploring the city, which is the largest of its kind in Central Asia, due to the mausoleum of Hodzsa Ahmed Yasavi. In Soviet times, I think it was used as a potato store in the same way as the churches, but today, with the help of the Turkish government, the building has been very neatly repaired.

The ancient Yasy (Turkestan's ancient name) was an important trading center for the Silk Road, the trade route between Europe and China. Turkestan was founded more than 1,500 years ago. Turkestan known as Yasy is the historical center of Kazakh culture.

Turkestan grew up Yasavi, the mystical poet who was "the first great Muslim holy man." Timur (also known as Tamerlane) ordered the construction of the Mausoleum of Hodzsa Ahmed Yasavius more than two hundred years after the death of the religious leader. written and preached in Turkish.

The theological school created by Yasavias attracted the desire for knowledge, both from neighboring cities and from Kazakhstan's steppes. The city became the most important center of Enlightenment in Kazakhstan. The commemoration complex on the great Yaszavi tomb has become one of the most visited places in Central Asia, also known as the "Second Mecca". Unfortunately, construction was never completed when Timur died in 1405 but remains a major pilgrimage site.

The height of the huge bowl, which could witness a number of historic catastrophes, is approx. 40 meters high. It has more than 30 rooms and halls. Elegant decorations, patterned ceiling arches and colorful majolica mosaics offer a stunning view. The panteon is the pearl of Tay Kazan, the largest cast iron in the entire Muslim east. According to the legends, the cup was poured from seven rare precious metal alloys in Karnak village, 25 kilometers from the town of Turkestan. (Unfortunately, there was no photo taken in, so these two pictures are from the internet). 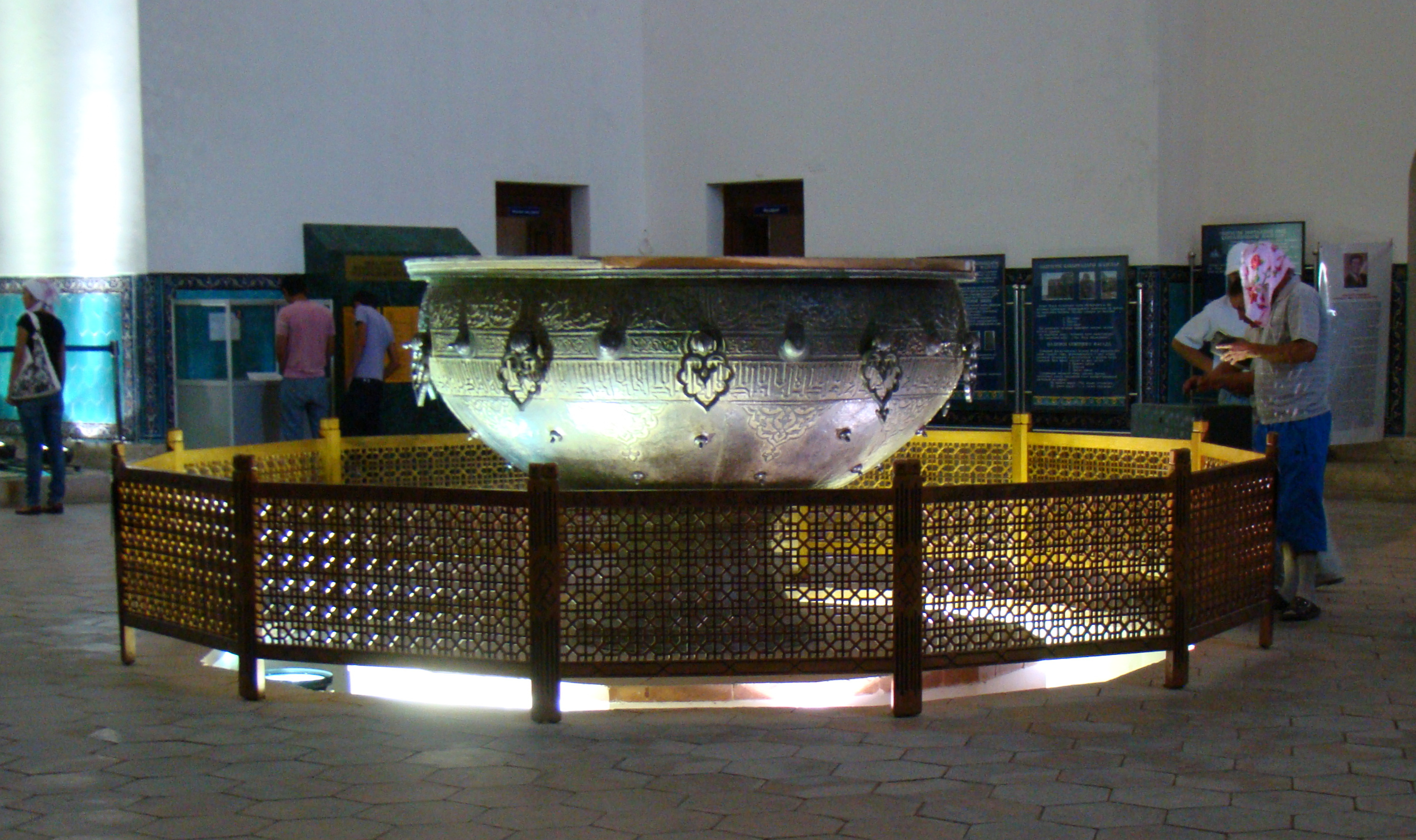 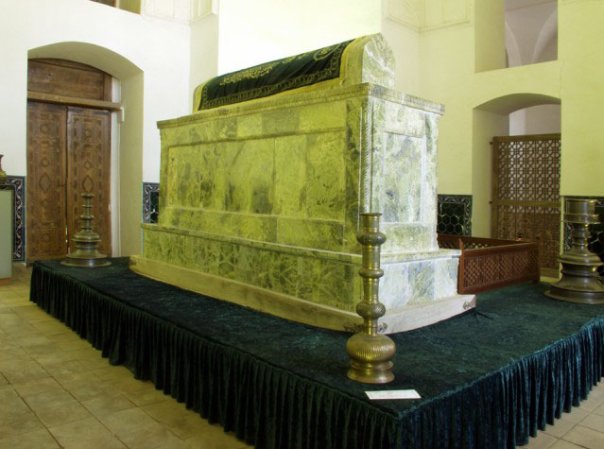 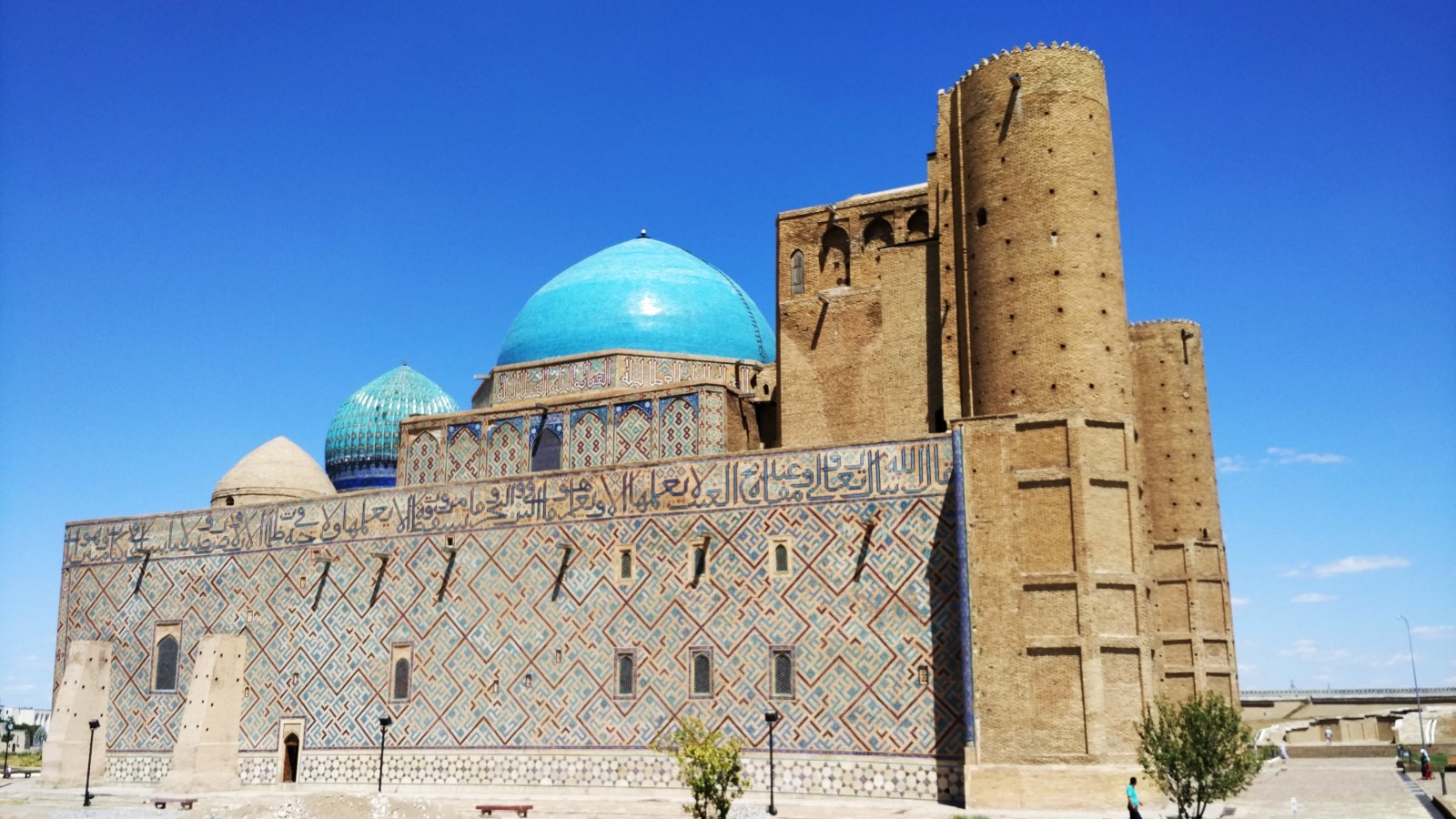 The mausoleum of Rabigha-Sultan Begum

This small building with bricks decorated dome is actually in the 15th century, but unfortunately there is only a copy now. The grandson of Rabigha-Sultan Begum Timur, whose husband, Abylkayyr Khan, is the 15th-century leader of then-nomadic interviews.

This 19th-century mosque features a wooden minbar and some religious items from the time of construction. The wall in front of the jamb and the wooden columns in the corner are allegedly from Yasavit.

The bath was still in good condition and it was interesting to look at it here as well.

Unfortunately, there is not much left of the castle wall, the most important part of it, the gate remained. 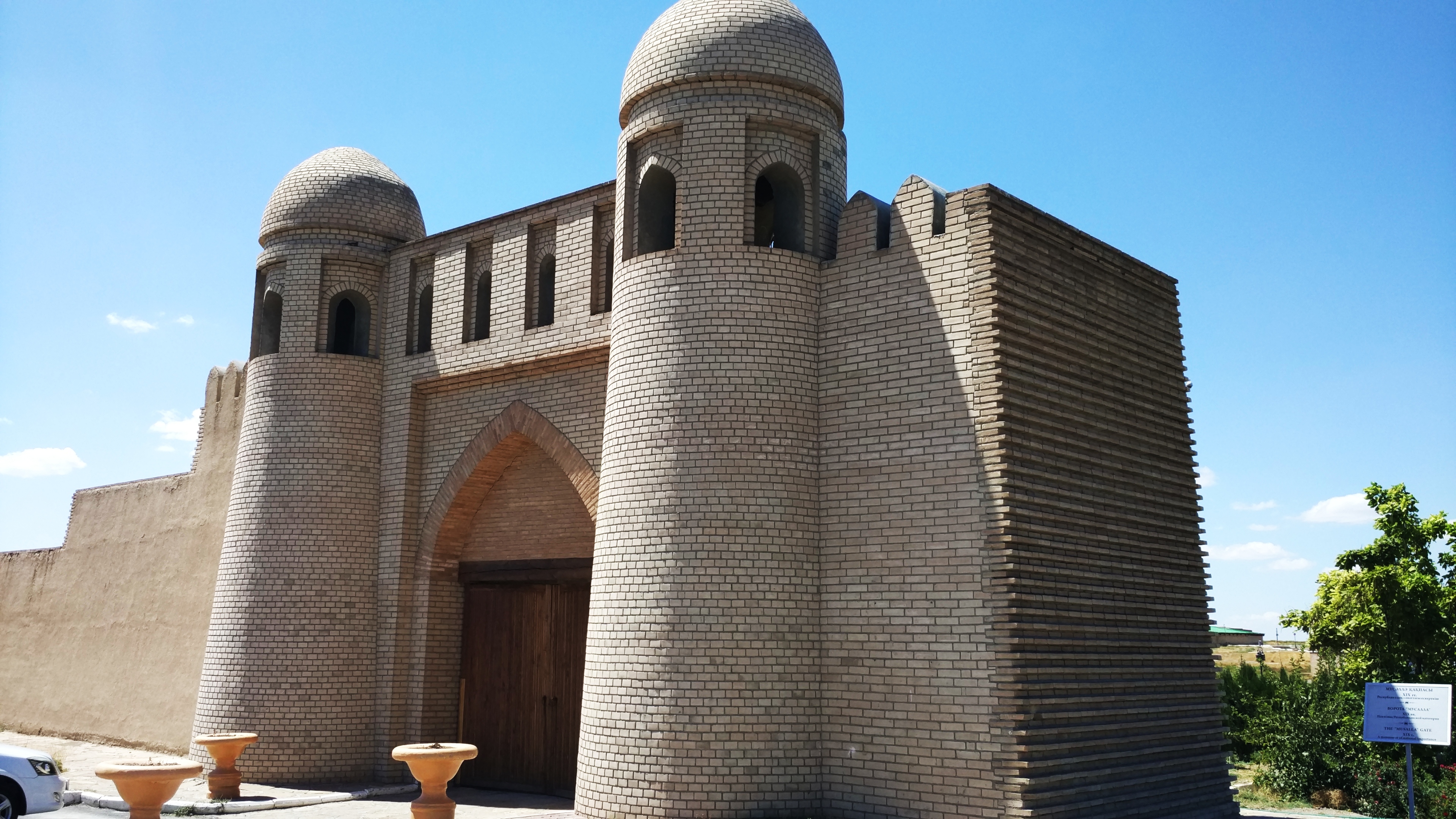 The semi-underground Hilti mosque is worth a visit, where Yaszafi lived a large part of his life. 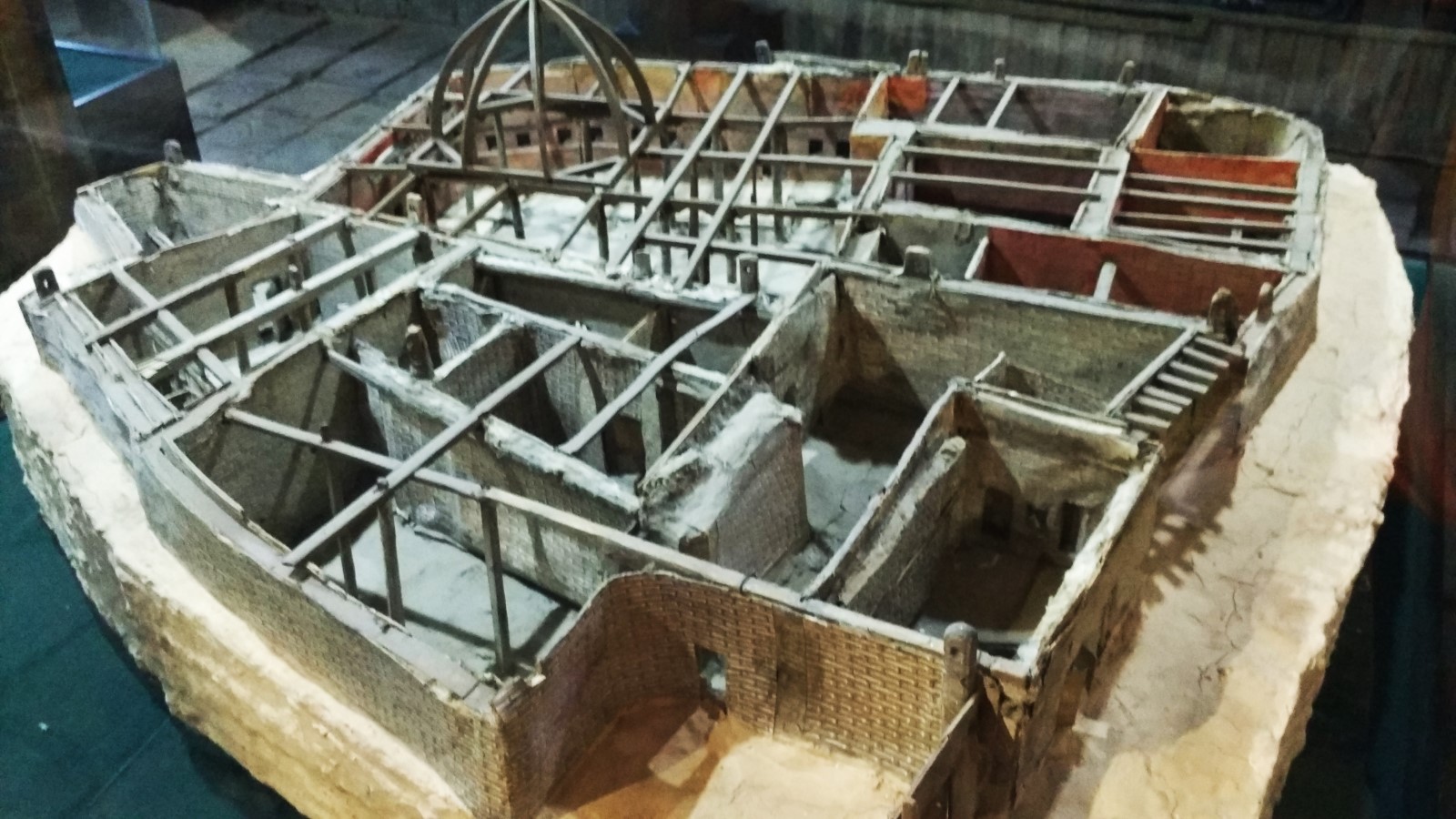 It is located northwest of Turkestan in Sauran or Savran as it was sometimes written on the Syr Darya river. As we entered the city, it felt that we were in a special place.

Much of the circular fort was hit by the passage of time, but in many sections there is a strong wall even more meters tall. Within the fortress, the ruins of an abandoned village can be considered.

Sauran was the capital of Mongolian horde in the 14th century. The 16th-century writers were characterized by two high minarets, built water supply system, a pleasant and fun town Szaurant. In addition to the walls, there are still some remains of bastions and gates that did not catch up with the fog of time.

Discovering Turkestan and Sauran was a real pleasure during the Kazakh trip. The remains of Timur architecture - though not as scary as in Uzbekistan - were, however, a sensational experience.

From Turkestan we went back to Shimkent by bus, and the next morning we took a short trip to Szajram; before we flew to Astana.

Just ten miles from Shymkent, where we went with a crowded mashrutka. The mashrutka stopped from time to time, sometimes picked someone up and sometimes someone landed.

The central intersection and the bazaar in Sayram are so crowded and chaotic as the place suggests. The crowds of elderly people buying meat from the butchers and young people browsing the DVD filled the narrow sidewalks as the cars crossed everywhere in the intersection. The collection of ancient sights and mausoleums is a short walk from the Mashrutka station.

The 10th-century Kudira minaret lies to the east of the central intersection, in the back yard of a school. The minaret has remained in good shape and can be climbed into the small tower through the impossibly narrow staircase. Next to the minaret there is a small excavation with a tin roof. 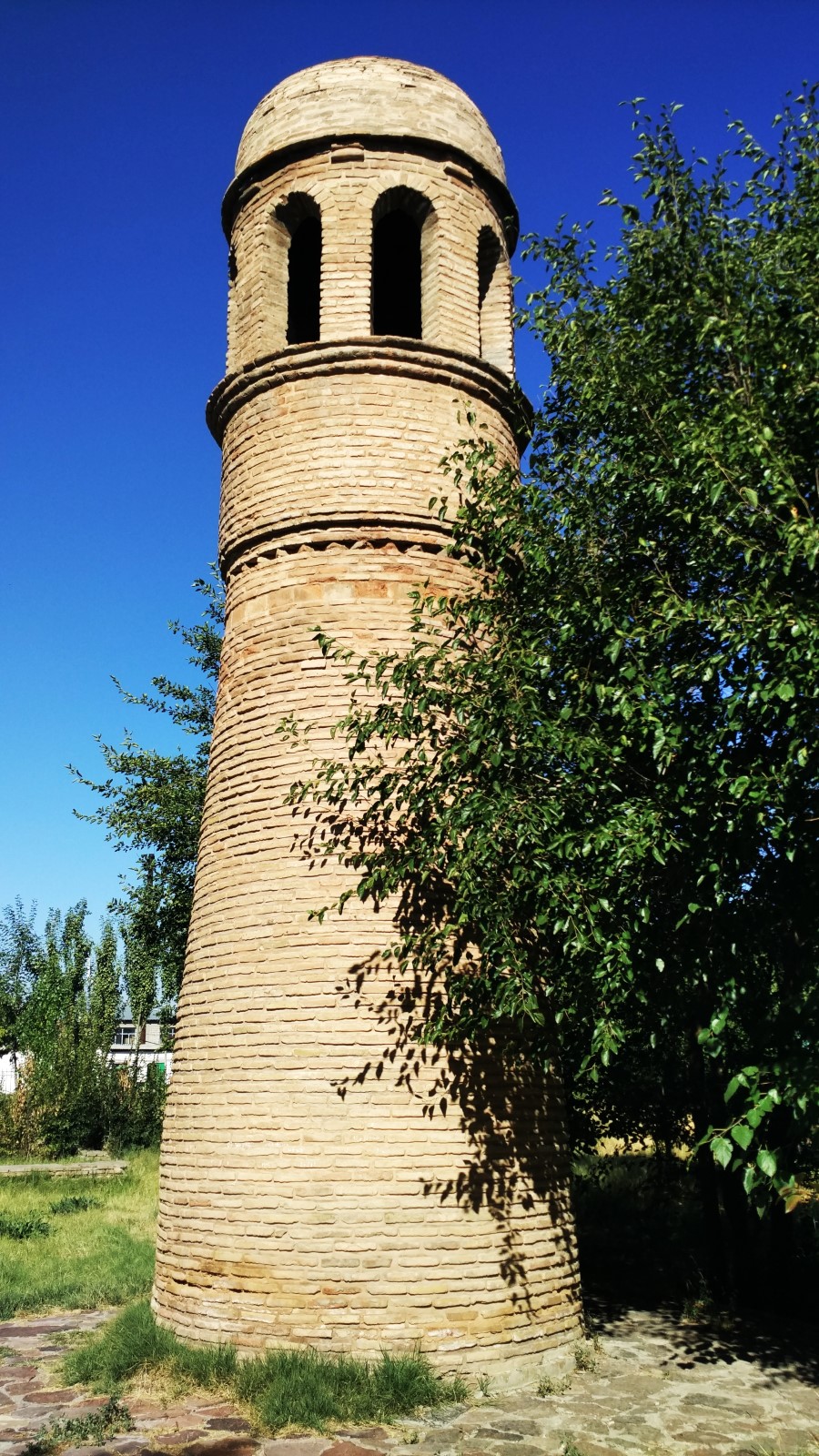 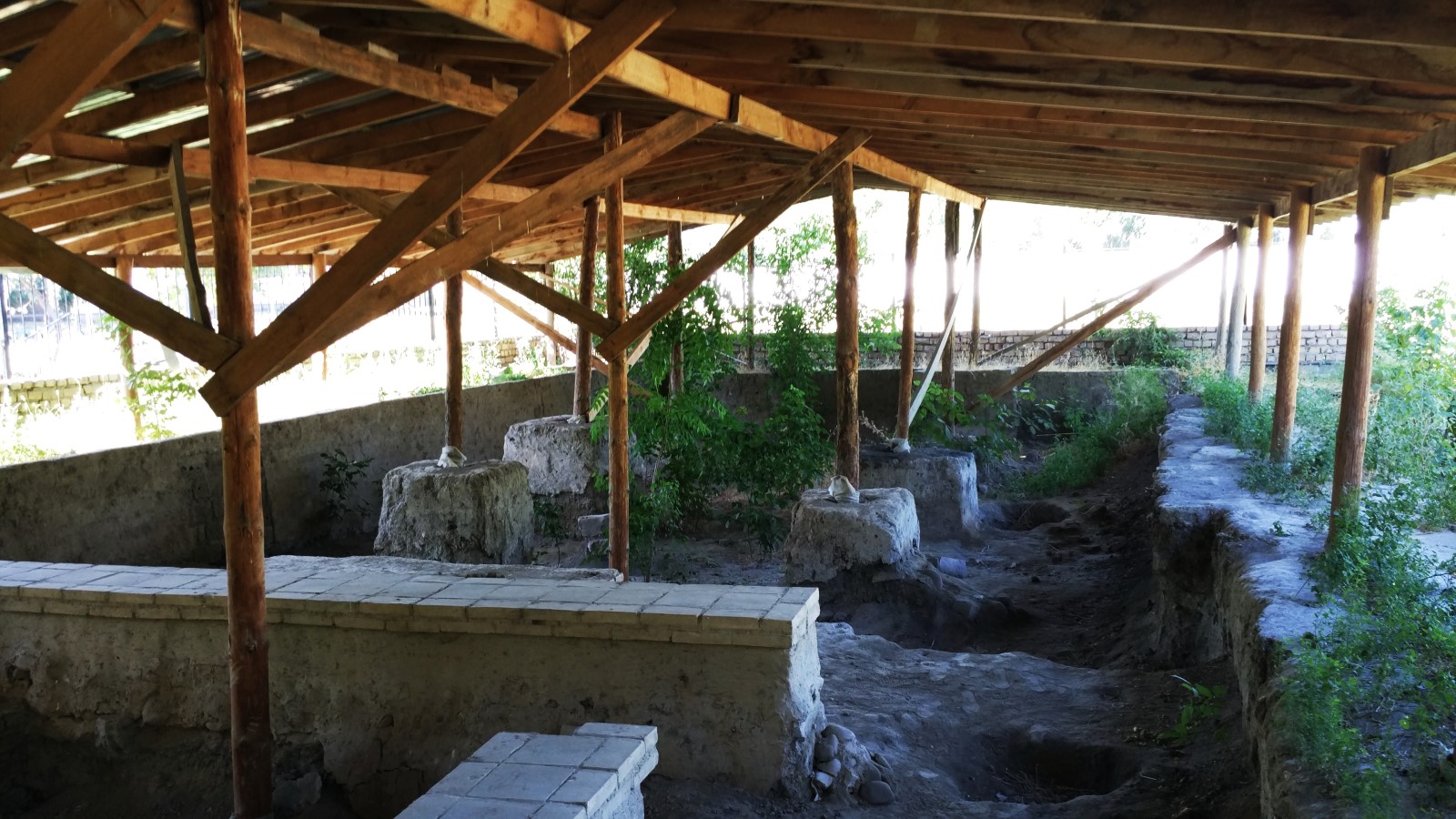 According to our local guide, the tunnels explored on the excavation were used by the king for escape routes in case they attacked the city. Although we were doubtful that it would have been enough to fit in with horses. (Especially after he thought the tower was 500 meters tall, it was just a clutch).

Karashash-Ana mausoleum is located in the western part of the bazaar and marks the burial place of Akhmed Yasavi's mother. 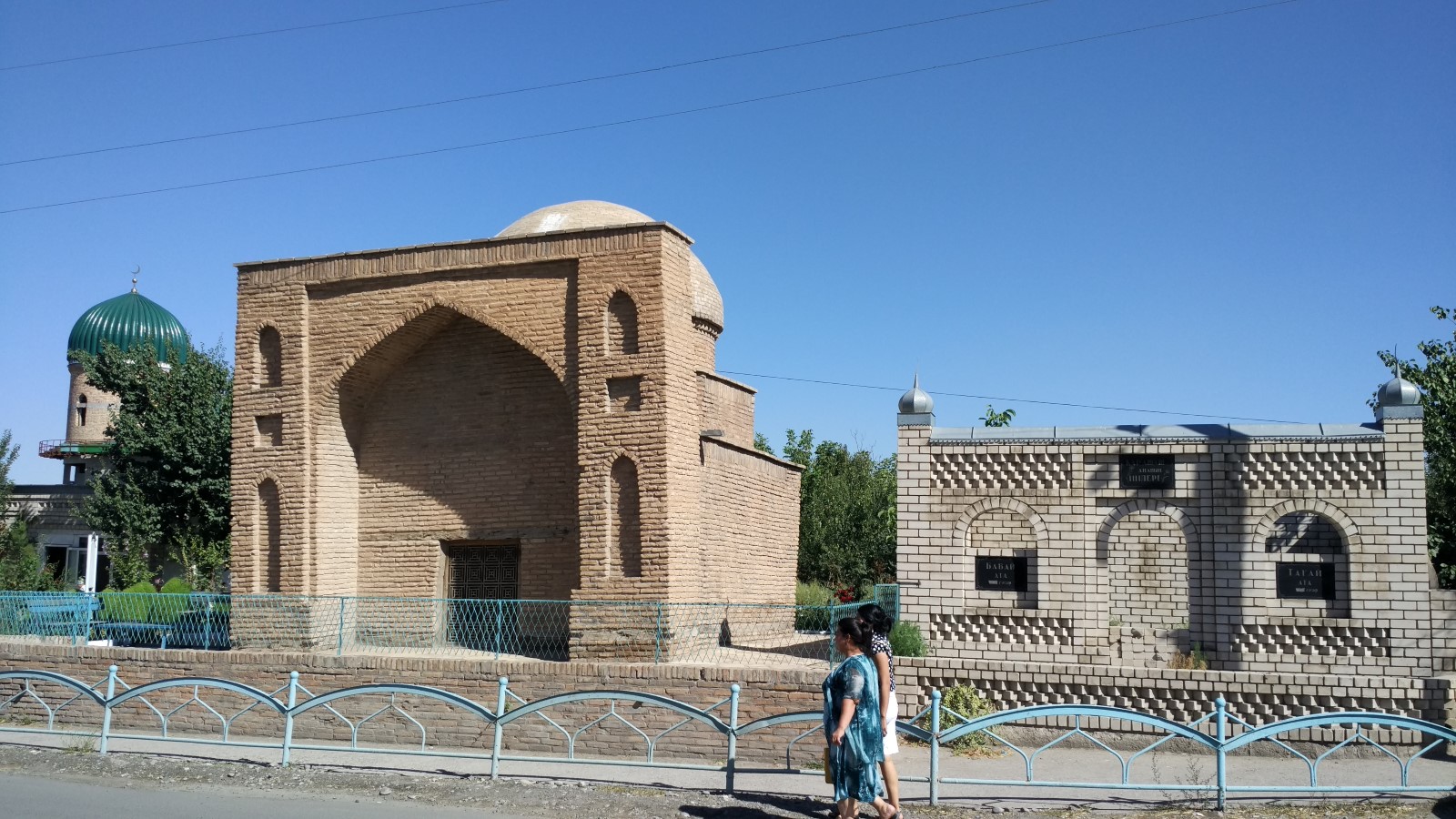 Next to it there is a school, whose prayeer room is inconspicuously beautiful. 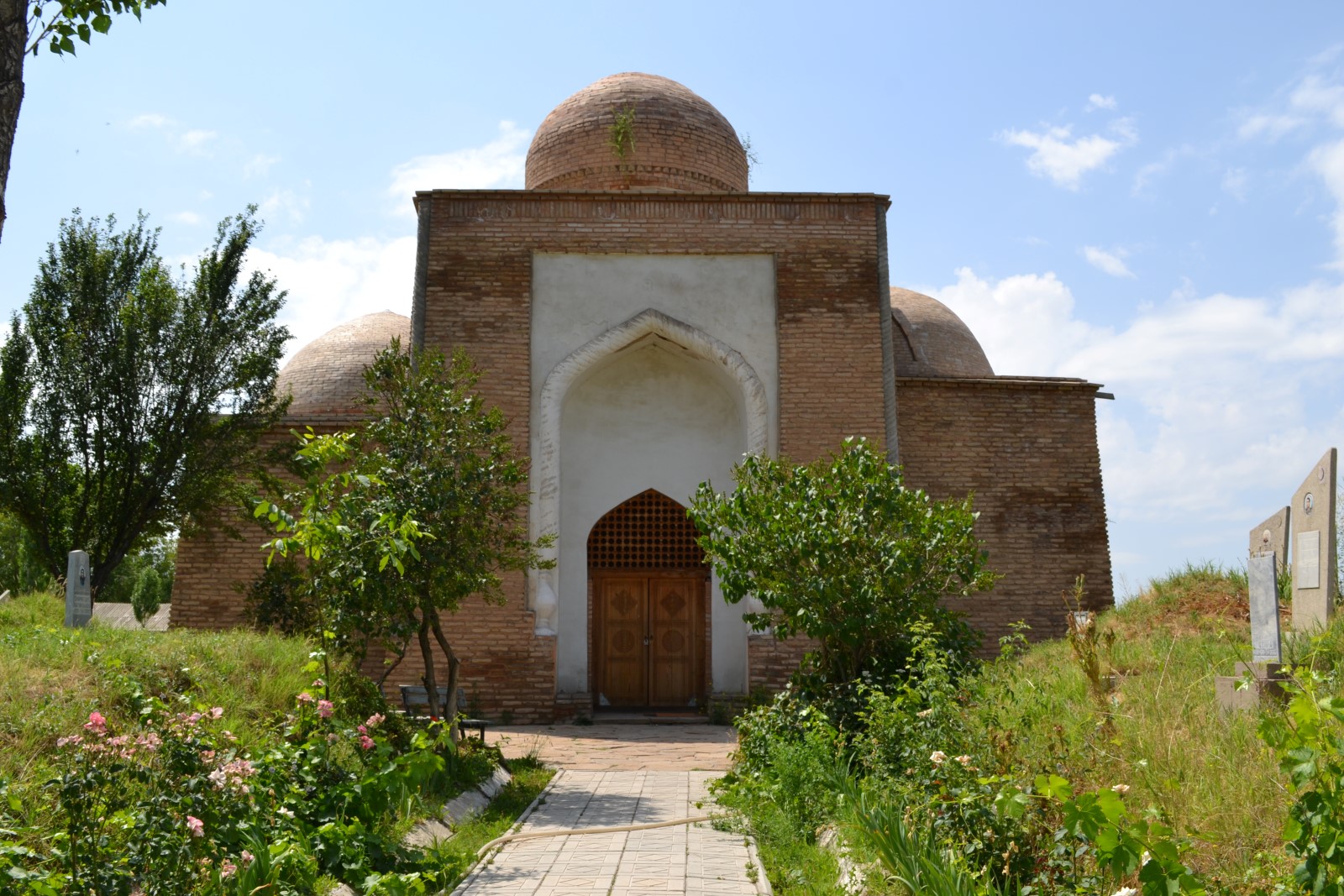 A local teens were driving us in Sajram. It was almost unbelievable that he was speaking in 5 languages for 15 years. We went to Grandpa's house, either. he also showed the clothes of his parents, how local fashion is.