I've known so far that Liechtenstein (caution, not Lichtenstein, because it is in Germany!) is swept between Switzerland and Austria, and that it is a small little country, but it really only came out when I was there. Liechtenstein is one of the countries in Europe where I have not been so it was time to explore it. And what a good decision it was! Immediately I fell in love with the beauty of countryside and the calmness what had received. Only the Rhine separates Switzerland, the state borders in the middle of the river. There is no formal border crossing, it's just there. 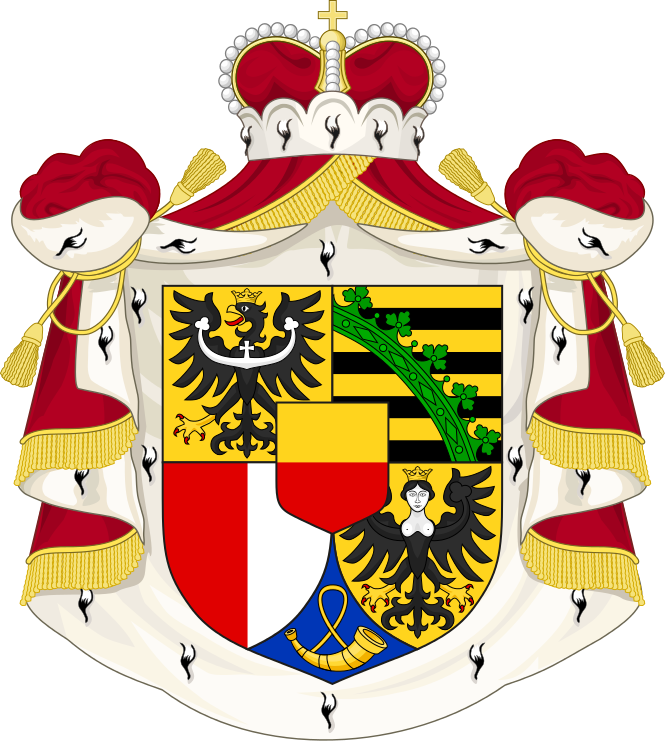 Liechtenstein is a ministate, officially known as the Principality of Liechtenstein, that is, Fürstentum Liechtenstein, an emblem of the cars is FL. However, this small size did not prevent the country from being one of the richest in the world. True, its wealth is due primarily to being known as a tax havens.

The capital is also very small; with a population of 5,000, what would it be? Actually there is a pedestrian street and a main street. The whole city can fit into an A3 page map so that every building can be recognized. This map and other information material can be obtained at the tourist office on the pedestrian street.

Also in this street we can find all the sights of the city, starting from Parliament and the Government Office, through the City Hall and the Museums. Walk around approx. 8 minutes from one end to the other end of the street, provided we do not stop photographing or go into museums and shops. The latter are not really worth it, because the prices are really astronomical, though the watchmakers can see a lot of watch stores.

The most important building in Vaduzi is Liechtenstein's parliament and the center of Government. Here is the House of Commons of the Parliament, the Head of the Government, its deputies and the councilors' offices, several other offices, the court, the police and the detention center.

The museums are interesting. The Post and Stamp Museum is free to enter. True enough, but this collection of stamps is great. Liechtenstein is the country of stamps, stamp collectors appreciate the stamps that were issued here, which, in any case, did not bring a small income to the country. In the 75 year jubilee year (1987), for example they sold a stamp of $ 21 million. Its significance has declined since January 2002, all the stamps issued between 1967 and 1995 were declared invalid. At this time, there was more spending on stamps than revenue. Annually there are 150-300,000 stamps left.

Under the postal museum is a part of the private collection of the prince's family: the most beautiful exhibition piece is the prince's crown; it's just a replica, but it's so beautiful.

On the other side of the Liechtenstein Center is the National Museum of Liechtenstein, where a Hungarian lady has adapted us.

On the other side of the street is the building of anthracite gray cubes of the Art Museum (Swiss designer's work). From time to time, a renewal exhibit presents a large number of pieces from the private collection of the prince's family, also at international level. 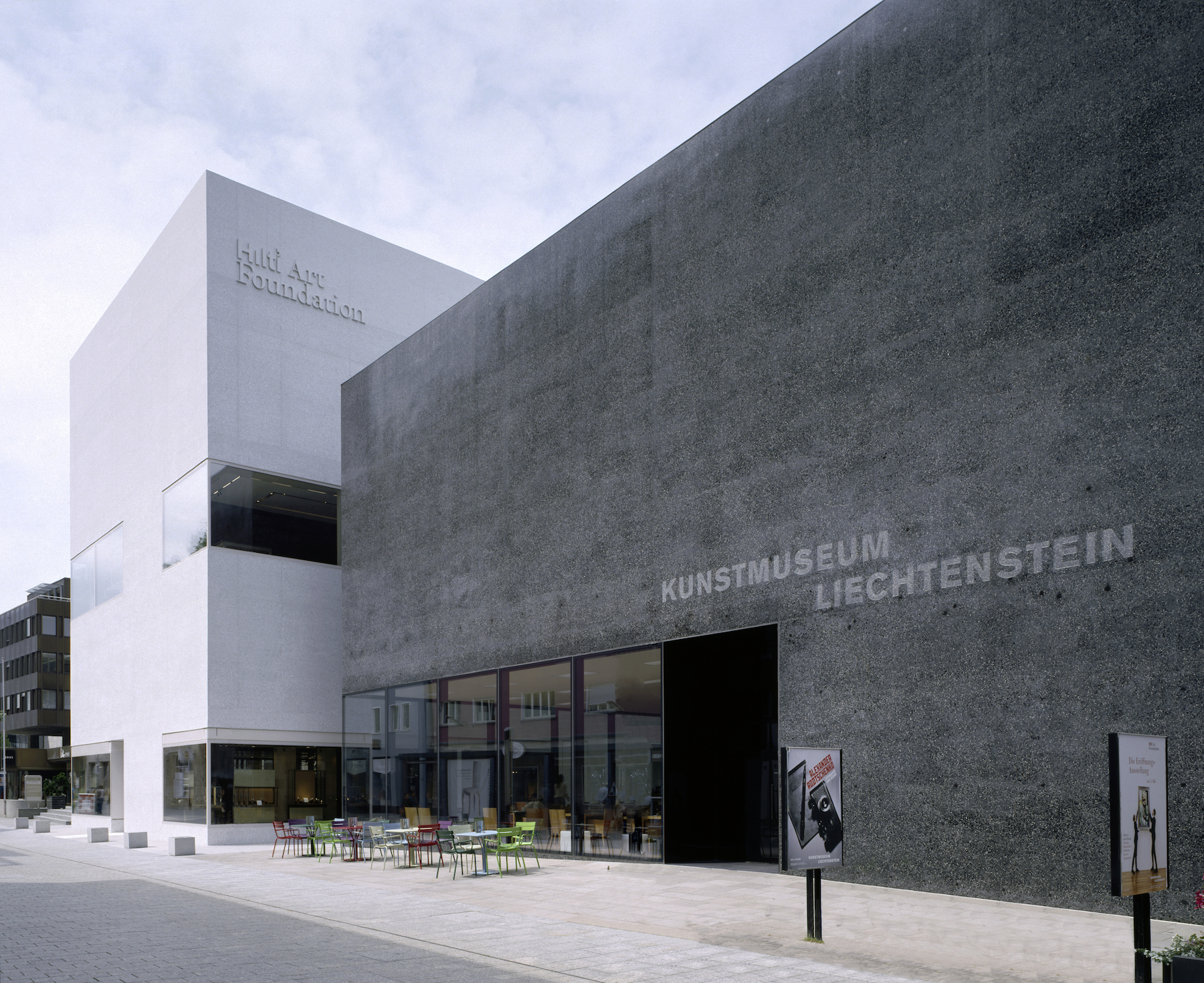 At the other end of the pedestrian area, the town hall welcomes the visitor.

The pedestrian area is closed by St. Florin's Cathedral.

The Prince's Castle looks down from the hillside to the town, but since 1938 it has not been visited since the prince's family has been inhabited since then. After the existence of an independent state in 1791, the first two princes did not enter the country, mainly in Vienna, and they lived in Czech and Moravian lands (after the Second World War, 1,600 km2 of their territory were nationalized in the Czech Republic). 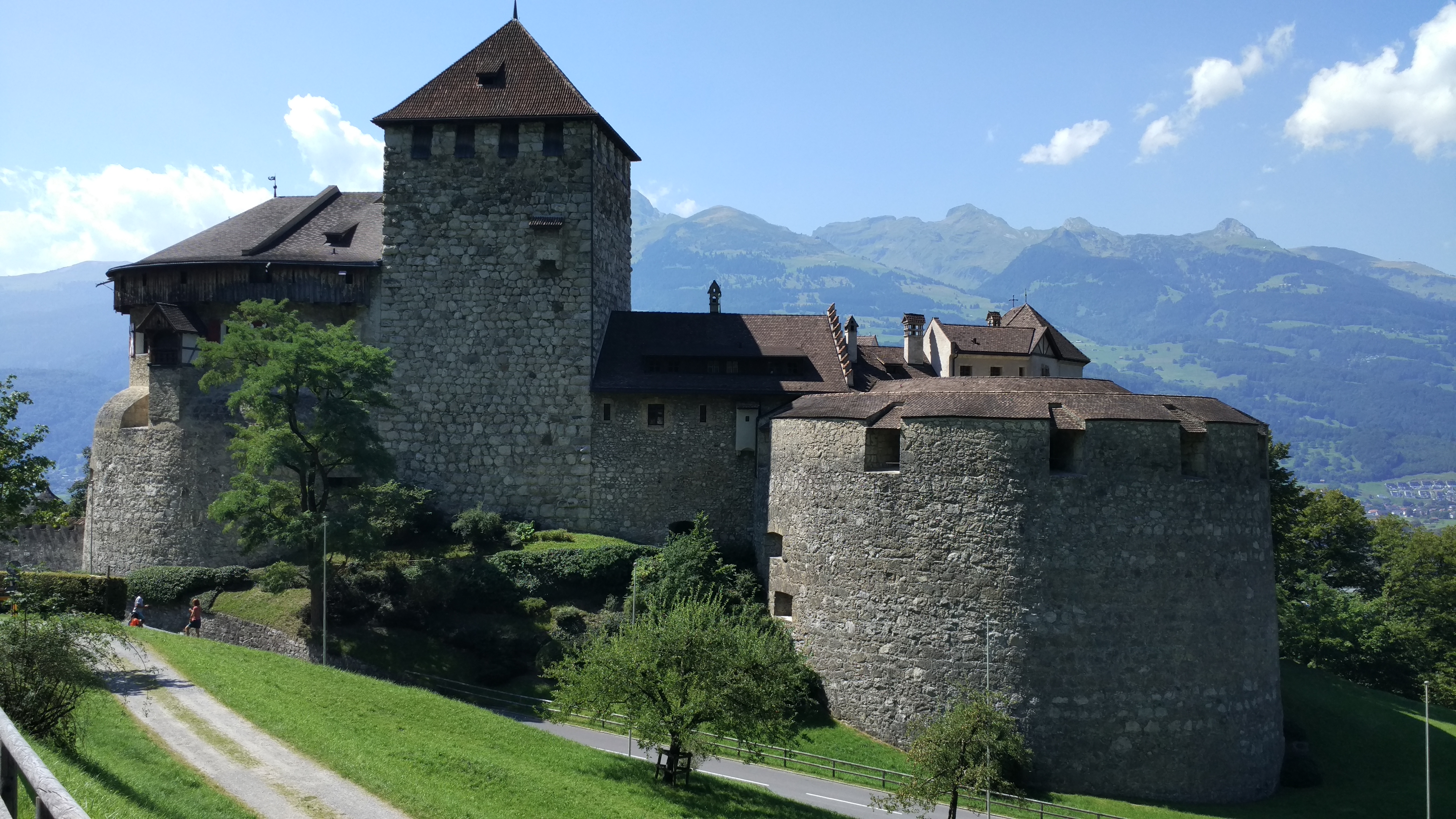 The notable Red House houses a massive, medieval stone tower with a wooden top floor and a crown of crowned crowns. Beside it stands a medieval, red painted, stairway-framed castle house. The building was built on the middle of the Middle Ages, originally owned by the Werdenbergs, and they came to their home, the Vaistli family. In 1525 the Benedictine abbey borrowed money. 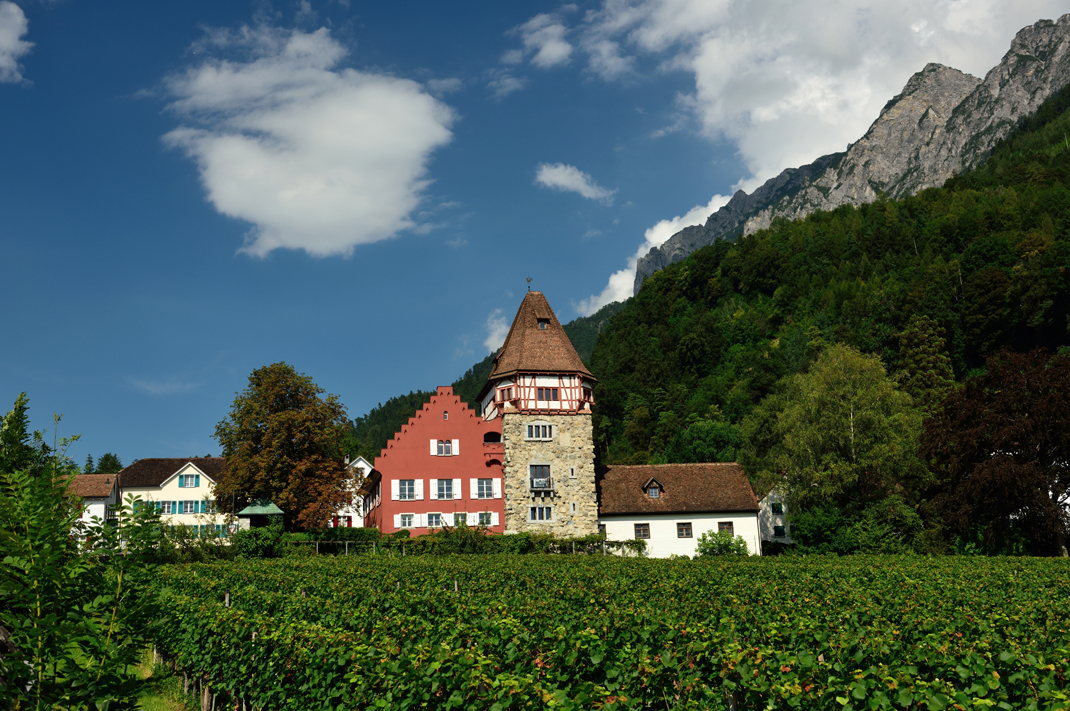 It is also worth visiting the old wooden bridge between pedestrian and bicycle border between Liechtenstein and Switzerland.

In the afternoon we took the direction of Malbun; taking advantage of the good time. We did a 16 km tour, which took us on a ridge of the Alps of Liechtenstein. The beginning of the tour was moderately heavy; it could be well advanced for him. The highest point of our tour was 2386 m.

But then, the difficulty came: downhill was no hiking, but rock climbing, rock climbing. All our knowledge needed to be able to come in peace; but managed :) Landscape was great all along; we had a wonderful outlook.

Balzers is located in the southern part of the country. Balzers is the second largest village with Vaduz. At the edge of the village, along the road to Luziensteig, to this day we can find an ornate carved border from the old stone. The inscription can be clearly indicated: Fürstlich Liechenstein and the year 1735. According to oral tradition, the stone was erected by Erős Jörg until the foot of the mountains. As the Swiss and the Liechtenstein could not decide where the border would be, it was the country's decision as long as the strongest man can carry the big stone over his head. Thus, the borders of the two countries are now far farther on the hillside.

With Balzers almost the same smaller settlement, Mäls, where we can see more interesting monuments. The most valuable castle on the hill, the Gutenberg Castle, which is privately owned, can not be visited by the castle itself, just the outside courtyard.

The Saint Peter Chapel is southwest of the castle. Some of the walls are part of the XIII. It was built in the 13th century until 1305 and it was the parish church of Blazers. Beautiful, carved winged altar of the XIV. century building. On the way to the river, you can also visit the graceful Mariahilf chapel with a small onion shingle tower. 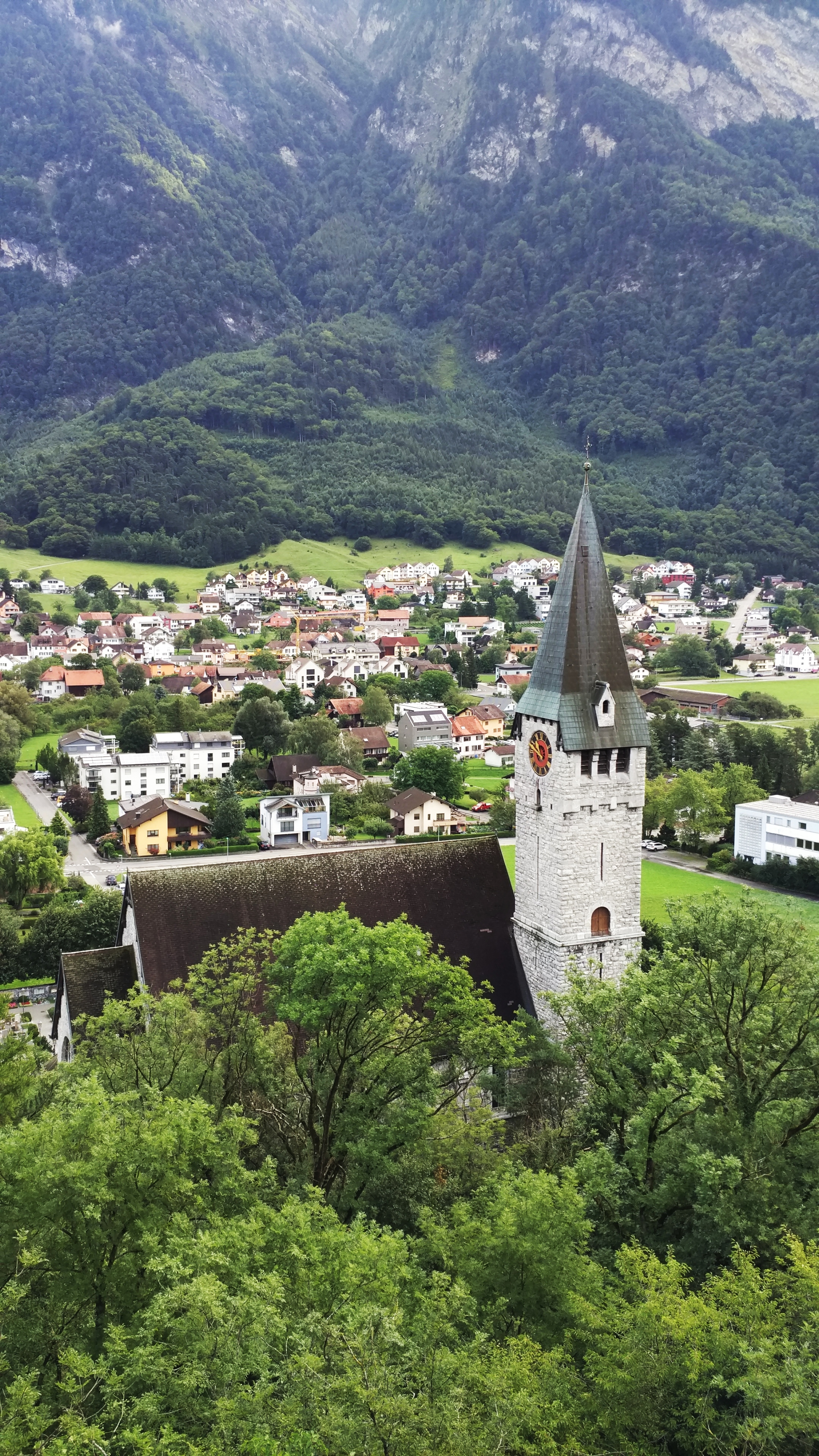 Schaan is virtually united with Vaduz, here is the "capital" railway station. Like Vaduz, Schaan was built on the hillside. At the site of today's town was once the Roman fortress Castellum, which is the road to the river valley. Most of the excavations were left as an open-air museum. St. Peter's chapel was built on the remnants of the former castle, its northern wall and shrine relies on the former castle wall. The interior of the church reveals findings from the end of the Roman period from the beginning of the Karoling Age. The interior arrangement and decoration of the church, the beautiful Gothic carvings and statues from the 16th century. century. The part of the village on the hillside is the Dux, here is the Chapel of Mary, which dates back to XVIII. century altar belongs to the baroque era. The chapel is the center of the local pilgrimage.

Regarding its territory, Schellenberg is the smallest village in Liechtenstein. The former denominator of the Count almost does nothing to remind the former glory - except for the ruins of the castle. Unfortunately, there were only a few left in the strong castle of Schellenberg. The castle was once the XII-XIII. It was built at the turn of the century. 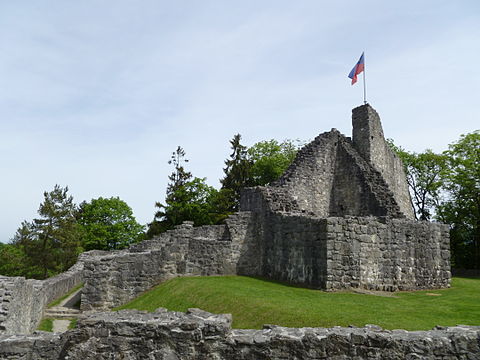 It was first mentioned in the 14th century, when two brothers Schellenberg Heinrich and Marqard co-owned it. Later the owners moved away and the castle lost its significance. The common wars of the country left traces of the once bright castle. Down on the hill, there is still a beautiful little church worth visiting.

Treisen is only a few kilometers away from Vaduzi at the foot of the mountains. The village with 3000 inhabitants is located in picturesque surroundings, its center is 512 meters high, with a very nice view (our accommodation was here with a beautiful view of the river Rhine).

The village is famous for its most beautiful houses and old church buildings. The Chapel of the Virgin Mary was once owned by the Order of Premonstrat and was named after the repentant Saint Lucius. Only a few remains of the old church remained in the southern wall of the present chapel. The remains of this fresco representing the birth of Christ can be seen. The church's current building dates back to the 17th century. century, decorated with beautiful Baroque altars.

Follow the Alitraveling blog on my Facebook page to get more information on travel and travel information firsthand!